Tabbouli is a salad that I have always loved and purchased frequently from falafel shops. I tried a version with quinoa and have made it a constant in my quick lunch ideas. The combination of flavour from lemon juice, parsley, tomato, shallot, onion and cucumber makes it one of my favourite ways to eat quinoa. If you have it on hand, try one tablespoon of chili macadamia oil (found in Hawaii) and one tablespoon olive oil for extra special flavour. Serve it on a bed of baby spinach for some extra veggie intake. 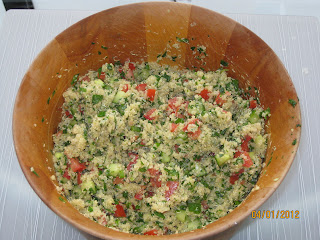 Cook quinoa in stock/broth and salt. Bring to a boil and lower to a simmer for about 15 minutes or desired tenderness. Let the quinoa cool to room temperature.

Note: May 20, 2013. I have been making this recipe lately with a mixture of parsley, cilantro and mint which adds an extra depth of flavour. Serving it with lightly cooked french beans is also a nice addition of veggies.

This entry was posted in healthy recipe, Vivian Law. Bookmark the permalink.